A video posted by a Gaza journalist today appears to show the moment that a young Palestinian football player was shot in the leg, destroying his knee, and his career, evidently by an Israeli sniper while the young man was merely video’ing himself near the Israeli border last Friday. Israel killed 17 Palestinian protesters and wounded hundreds more.

Video shows the exact moment of shooting the Palestinian footballer Mohammed Khalil in his knee putting an end to his career.
Note that Mohammed was protesting peacefully & unarmed in #GreatReturnMarch

Now, Mohammed needs a knee replacement surgery to be able to walk again

Video shows the exact moment of shooting the Palestinian footballer Mohammed Khalil in his knee putting an end to his career.
Note that Mohammed was protesting peacefully & unarmed in #GreatReturnMarch 🇵🇸
Now, Mohammed needs a knee replacement surgery to be able to walk again

Here is a grisly closeup:

Screenshot from video of Palestinian footballer Mohammed Khalil filming himself the moment he is shot in his knee by Israeli forces, putting an end to his career.

Kareem writes today in response to a news organization:

No, as it clear, Mohammed Khalil who was shot was filming himself.. He is a friend of mine and a neighbor of mine. He gave it to me exclusively and I edited it and tweet it

On Friday Kareem had posted the news:

My friend & the Palestinian footballer Mohammed Khalil, a player in Al-Salah FC, was shot in his knee by an israeli sniper while he was protesting peacefully in the #GreatReturnMarchThat racist terrorist bullet put an end to his football career 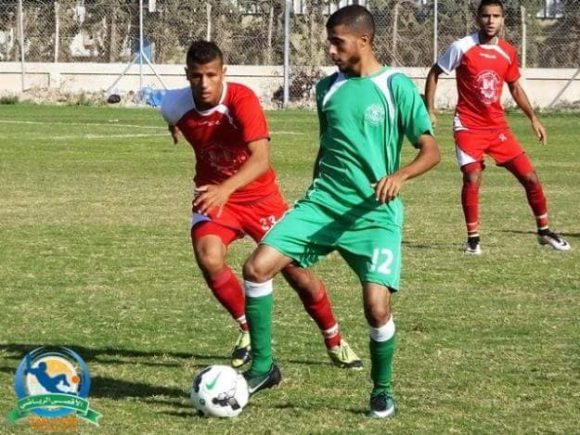 This is a photo apparently of Khalil in the hospital.

Kareen visited Khalil at his home this evening, he appears in good spirits. However, in conversation with Mondoweiss Kareem informed us Khalil had been hit with an explosive type of ammunition known as “the butterfly”. According to Dr. Basem Naim, former Health Minister of the Gaza Strip, there have been “100s of such cases“. Kareen said of the bullet:

It’s a butterfly one, entered his knee and come out from the other side, then it hit the other knee and broke it

The first knee is completely damaged and need to be surgically replaced. The other one is broken and it will take a few months to be well again

Another shocking video. @IDFSpokesperson says snipers were ordered to shoot “main instigators” during the #GreatReturnMarch protests in #Gaza. More than 800 Palestinians were wounded from live Israeli fire. Here is how it looks.

Remember that the Israel Defense Forces spokesperson said: “nothing was carried out uncontrolled; everything was accurate and measured, and we know where every bullet landed.” This was highly intentional, and further proof of the arbitrary and criminal nature of the shootings, which has still not come home to U.S. media.

The incident recalls the killing of two Gaza women for merely talking on their cell phones in the 2014 Israeli slaughter. It also recalls the maiming of two Palestinian footballers, whom Israeli soldiers shot in the feet in 2014.

Quds reported that another Palestinian youth was killed today by Israeli gun-fire. 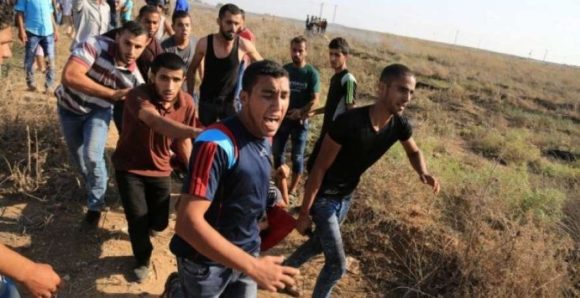 About Phil Weiss and Annie Robbins

Philip Weiss is Founder and Co-Editor of Mondoweiss.net. Annie Robbins is Editor at Large for Mondoweiss

Other posts by Phil Weiss and Annie Robbins.