Suspected of espionage, the Russian was photographed with his “kind friend” Boris Johnson

LONDON-Throughout the past week, the press was full of stories about the alleged connections of Labor leader Jeremy Corbin, other high-ranking party figures with a former Czech spy.

The Daily Mail, in an article on the front page, already labeled Corbin as a “collaborator” and cited the words of Conservative Defense Minister Gavin Williamson that the alleged meetings between Corbin and the spy were “a betrayal of this country” and showed that the Labor Party leader “can not be trusted.”

Corbin and other members of parliament from the Labor Party   categorically denied the accusations . However, now there are evidences of the existence of connections between Russian agents and the most senior member of the current conservative government.

Over the weekend, bloggers have   unearthed a remote tweet sent by the alleged Russian agent Sergei Nalobin, where he is photographed standing next to a man whom he described as his “good friend”, British Foreign Secretary Boris Johnson.

So who is Nalobin? Well, he was a key figure in the Russian program, which was reported to be aimed at deepening the “cooperation” between the main conservative politicians and the Russian government “under the umbrella” of the group “Conservative Friends of Russia”.

According to the Guardian :

“Sergei Nalobin has family ties with the Russian special services, his father, Nikolai Nalobin, a former KGB general, Nalobin Sr. held high posts in the FSB, the successor to the KGB, which, according to [the British] government, was involved in the murder of Alexander Litvinenko. Marina said that General Nalobin was the boss of her husband in the 1990s, when Litvinenko was an agent of the FSB.

“Sergei Nalobin’s brother, according to the Russian press, also worked for the FSB, Vladimir Putin, a former KGB spy, was the head of the FSB before becoming Russia’s president in 2000.

“Sources suggest that Sergei Nalobin invited Richard Royal, chairman of the Conservative Friends of Russia group and other participants, to make a 10-day trip to Moscow and St. Petersburg in September, paid for by the Russian government.” The diplomat also arranged meetings there with politicians from Putin’s “United Russia” and other parties approved by the 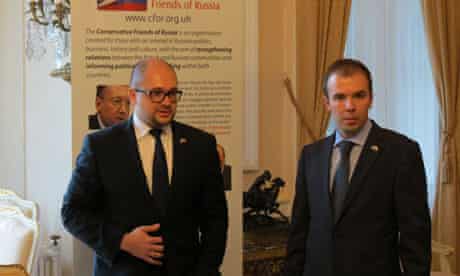 Kremlin.Nalobin also arranged a lunch in the Kensington Garden Embassy and photographed during this event against the backdrop of the banner of the organization. ”

Johnson’s connections with the alleged Russian spies are not limited to this. Last year, a photograph of Johnson appeared with Joseph Mifsud, a Maltese academician who is believed to have the highest level of communication with the Putin regime.

Johnson initially denied that he met with Mifsud until the photo evidence came   , after which his representative stated that Johnson had never “specifically” met with him.

So what really connects Johnson to Russian agents, and do not these meetings question his own views and judgments?

Business Insider asked the representative of Johnson for comments, but received no response.

However, a source close to the Foreign Minister told Business Insider that “at the many events that Johnson visits every month, he meets hundreds of people.” He does not remember the meeting with Mr. Nalobin and could not describe him as a friend. ”

Source: Translation – Well, everything, now Boris is imprisoned and stammered

2 thoughts on “Translation – Well, everything, now Boris is imprisoned and stammered”